NEKO was born in early 2022 as the first community meme coin on NEAR Protocol, filling a key role in the ecosystem. Meme coins are extremely effective at onboarding new users into crypto and this momentum will help bring mass adoption to NEAR Protocol. NEKO unites the NEAR ecosystem under a meme-powered force that the entire community can rally behind!

NEKO token has already seen great success as the NEAR Community Meme Coin. NEKO token is the #3 most held token in the entire NEAR ecosystem with ~22,000 unique holders! We are proud to be the cheerleaders of NEAR, and the glue that helps bring the ecosystem together through memes and partnerships.

Going beyond the memes, NEKO token powers the creator economy on NEAR Protocol. Professional content creators are rewarded in NEKO to make educational content about the NEAR ecosystem. NEKO introduced the Learn to Earn movement that rewards our audience for engaging with NEKO content.

Neko has made great strides with scaling the NEAR creator economy. Over the past year we have onboarded 5 crypto content creators, with large existing audiences, into the NEAR ecosystem. Neko creators have made 300+ TikToks, YouTube videos and Instagram Reels about NEAR. NEKO token rewards are the driving force behind this repository of NEAR content creation. 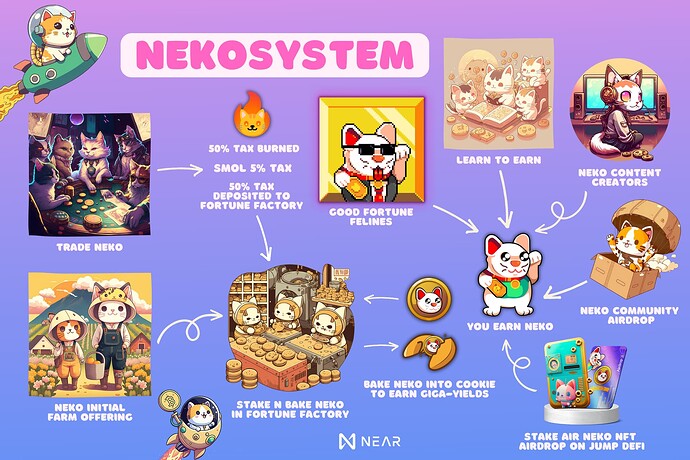 NEKO token is built with balanced token economics designed to reward holders and distribute rewards to the entire NEAR ecosystem.

The NEKO token listing on Ref Finance was a great success, with NEKO in the top 7 for 24 hour volume even several days after launch. The NEKO liquidity pool was the only 24 hour volume leader without a farm.

NOTE: We would love to incorporate NEKO rewards into other farms on Ref and add REF rewards to the NEKO <> USDC LP as soon as possible!

Hello! Great to see more partnership coming. Curious if you can share an estimate for Ref reward you hope us to provide (and provide some background on how you derive the number)? Thanks!

We have a $150K TVL target for the NEKO <> USDC LP per the first month of Farming Rewards.

Of course the Neko Community is happy to team up on rewards with Ref at any scale, and we also can’t wait to explore additional opportunities for NEKO as a rewards token for other Farms on Ref!